We love Christmas! So, after a busy autumn preparing for our performance at the wonderful Pipe Up festival in Manchester in early November, now we are full steam ahead getting ready for our Christmas concert with mighty Qukulele! We first saw Qukulele at the Street Choirs Festival this summer, and we immediately identified each other as kindred spirits, so we are totally delighted to be joining them for their annual Christmas Spectacular. We’re dusting off some of our festive favourites and any night out with Qukulele is bound to be a blast.

If you are in striking distance of Brighton on 16th December, then come along and see us. It will be the highlight of your festive season.

It’s an exciting time for Gin and Harmonics.  We have “harmonic minors” being born left, right and centre and it seems that in a few years Naomi’s dreams of having her own youth choir will be achieved. But, despite big changes for some of us, we are all still committed to both gin and harmonics, and so you may now sometimes see us singing in a “shorter measure”.  Our Gin Shots quartet and Botanicals trio have been bringing high spirited singing to audiences when the rest of us were home singing lullabies.

The Hand in Hand festival in Manchester last summer was the debut performance of the Gin Shots. With so many fond memories of the last Hand in Hand festival in Brighton, we were delighted to have another chance for a brilliant knees-up and sing-song with some of our favourite choirs.  We were also chuffed to debut two new songs.  The first was this gorgeous arrangement of Weakness in Me.

And moving from the sublime to the ridiculous, we love this new addition to our repertoire which captures the feeling you get when you know an amazingly talented, charming and beautiful woman… and then you see who she is going out with.

You can see the Gin Shots back in action in all their fierceness this summer at the Street Choirs Festival where we’ve been invited to sing in the opening concert at the Brighton Dome on 29th June 2018.

We are delighted to be taking part in the Science Museum Lates special event for Pride in London.  It sounds like a really interesting evening:

“50 years on from Parliament’s vote to partially decriminalise homosexuality in the England and Wales, we’ll be filling the Museum with a whole host of activities and events exploring the science and culture of sexuality.

Don’t miss a night of enlightenment and revelry with music from the London Gay Men’s Chorus and Gin and Harmonics; 201 Dance Company’s urban ensemble presenting extracts of the award winning ‘Smother’; and three of the UK’s leading Drag Queen acts, Topsie Redfern, Vanity von Glow, and girl band the Vixens.

Take part in speed life drawing classes or have a go sampling the sexiest foods around while learning about aphrodisiacs.

Plus, join Channel 4 News’ Technology Journalist Geoff White, as he shares the findings of his investigation into the internet dating scene, or enjoy talks and panel discussions exploring topics such as the recent decline of queer nightlife spaces, what can be done to improve sex education in schools, and whether sex robots would ever be welcome in our society.”

29th October saw all 10 harmonicas up bright and early (well, early) and on our way to the UK choir festival!

On the a capella Express! (or the 8.40 to Luton, depending on how excited you are about @UKChoirFestival) pic.twitter.com/y4Xat7lcmV

It was a day full of workshops starting with Bazil Meade’s gospel workshop and then two great technique workshops from Ben Parry and Ben Sawyer.  The final workshop, after lunch was by ex-Swingle Joanna L’Estrange who taught us all how to swing!  The workshops were great and gave us much food for thought, for instance about how to tune thirds and fifths, and how to get a great blend by focusing on our vowel sounds.

We also learnt that, despite their best efforts, our alto 1s probably don’t have careers as swing singers ahead of them!  We  managed to nab the back row for the day so we could misbehave as much as we liked!

After the workshops there were performances from all the choirs taking part. This was a real highlight – it was wonderful to hear so many great choirs, some fantastic arrangements and to make new choir buddies!

Then it was our turn on stage.  It started off really well with a rendition of Mad World, but looking at this photo of Kiss the Girl, I fear we may have had a lot more gin than we remembered! 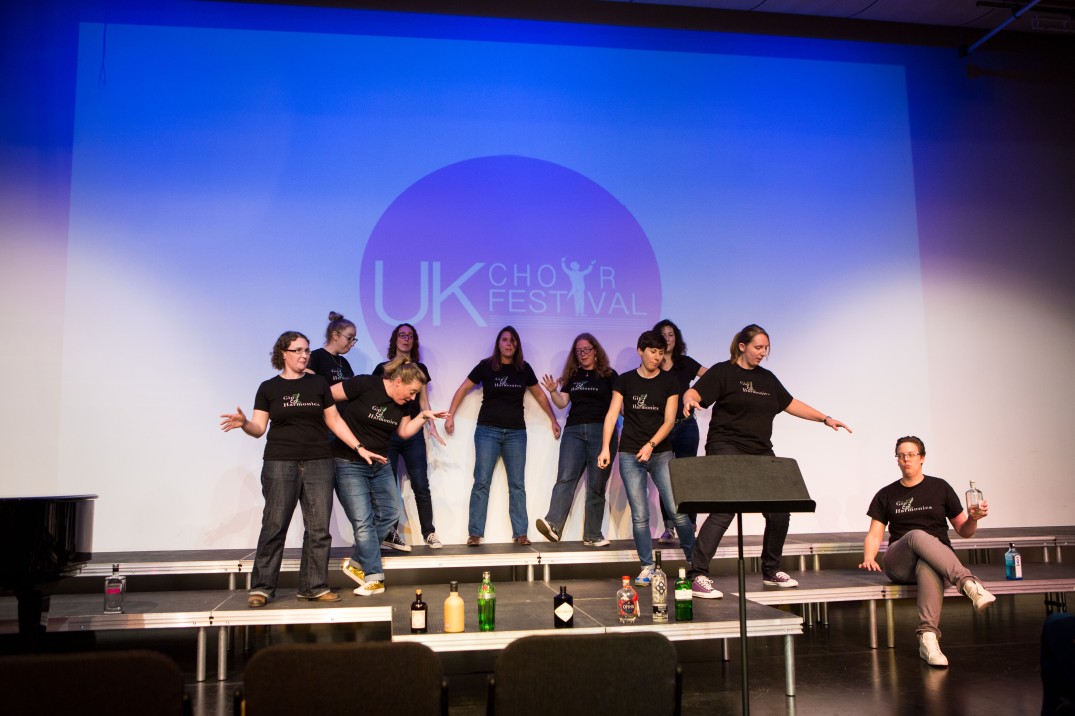 The other choirs were fantastic and ranged from the tiny but mighty four person group The Wands, to the joyous throng of the Next Stage Choir.  Some truly beautiful performances, especially moving performances from Sing Tower Hamlets, and some effortless cool brought by the Wrablers, while G Force gospel choir were an explosion of joy. We’re still impressed by the New Maindenhead choir’s ability with body percussion, and with the really delicate performance from Dawn Chorus, whilie Herts and Soul absolutely lived up to their name. 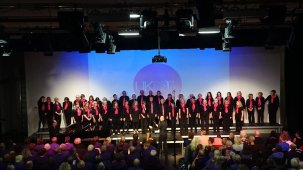 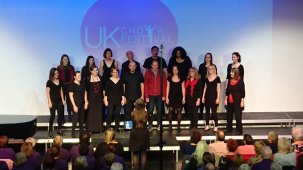 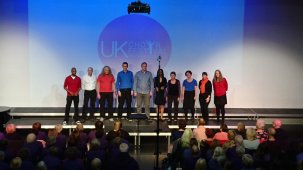 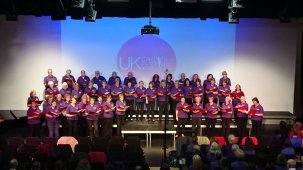 Making new choir friends is one of the best parts of festivals, so we’re really excited to be going to watch the Wrablers Christmas concert on 17th December!

Join Gin & Harmonics for an evening of festive music, fun and frolics! There’ll be gin (definitely), tight harmonies (hopefully) and some rollicking singalongs. From ‘Deck the Hall’ to ‘White Christmas’ we’ll be getting deep into the Christmas spirit so come and join us as we gin-gle all the way!

All profits from this concert will go to Camfed, the Campaign for Female Education. Camfed supports marginalised girls to go to school, succeed, and lead.

We were delighted to sing at the ICP Support Anniversary Ball last night.

ICP Support is a charity dedicated the support of people affected by intrahepatic cholestasis of pregnancy (ICP),  the most common liver condition specific to pregnancy. It affects around 5,000 women a year in the UK (that’s about 0.7% of all pregnancies) and is associated with fetal distress, spontaneous premature labour and, in very severe cases, stillbirth.

We’re pleased to share that the event was a huge success and they were able to raise around £15,000!

You can find out more here: http://www.icpsupport.org/25th_anniversary.shtml

We are very excited that the video of our award-winning performance at the Voice Festival UK has just been released!  So, make yourself a gin and tonic and sit back and enjoy!

The show starts with a setting of John Masefield’s poem Sea Fever with music written by our Alto 1 Kate.  We’ve long wanted a sea shanty in our set so enjoy the rollicking opening.

We then sing Mad World, our nihilistic anthem with music arranged by Soprano 2 Naomi.  This is one of our absolute favourites – even if it is one of the most miserable songs ever written.

We move on to sing Franz Biebl’s Ave Maria.  This is just such a stunning piece of music and we are delighted to have a recording of us singing it! We especially love Alto 2 Cat’s solo at the beginning and our soaring sopranos!

Finally, we finish with Kiss the Girl, a song that always makes us smile.

A huge thank you to everyone at the Voice Festival for their tireless work in putting the festival together and for making such a great video! 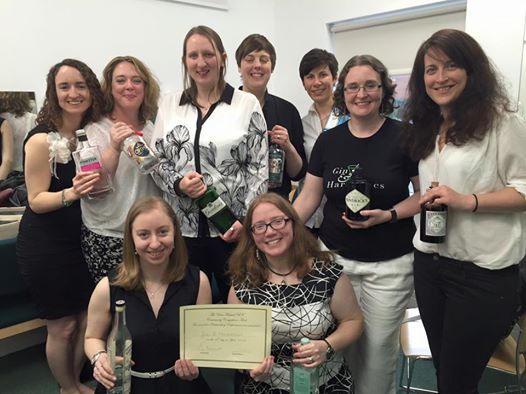 We had great fun this weekend singing at the Voice Festival where we were finalists in the community choir competition and where (drum-roll, please) we were completely chuffed to win the award for outstanding performance! Whoop!  We got a certificate and everything. Last time most of us got a certificate it was for a bronze swimming award, so this was very emotional.

Our brilliant second altos also got a special mention for adding in some rhythm and really rounding out our sound.   We think their rousing rendition of dng-ch-dng-ga-d-dng-ch-dk-a-doo-doo in Kiss the Girl was what really caught the judges ears.  None of the rest of us know how they can do it solidly for three minutes without falling over and judging by the look they gave me when I asked, we wont be finding out their secret any time soon.!

It is always good to hear other choirs at these events and our fellow participants didn’t disappoint.  In the Smoke were on fire with their smooth tone, rich arrangements and imaginative choreography, while we just loved Academix A Cappella for their style, humour and a brilliant rendition of Shake It Off!  The Few were also there (they seemed more like the Many to us!) and they pulled out an engaging performance that the audience really enjoyed.

Also exciting was that we had our own dressing room – with our name on the door and everything. It even came with a convenient place to store our gin. 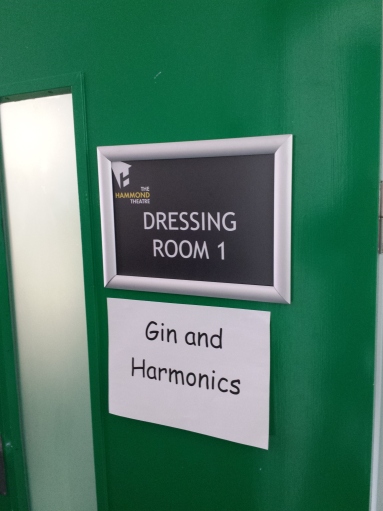 The only problem in the whole day is that we had forgotten to bring any tonic.  Not that such a trifling problem stopped Kate, of course.  A big thank you to everyone at the Voice Festival for making the event such fun!

We are very excited that on Sunday we will be taking part in the Voice Festival weekend!  We’re looking forward to singing alongside the mighty In the Smoke, the stylish Academix A Cappella and a cappella’s baker’s dozen The Few.

They say that preparation is the key to success, so we have put together a clear plan to make sure we are ready on Sunday:

Happy New Year from all the Harmonicas.  We hope you had a great 2015 and that your 2016 is full of gin and singing.

Start the year with a song: come and hear us on 9th January!

We’re very excited that our next concert is on 9th January!  We’ll be performing alongside the Pink Singers and the Barberfellas in  what promises to be a very exciting concert of original compositions (one written by one of the Harmonicas) as well as arrangements of some of your favourite songs (several of these have also been arranged by Harmonicas!).  Find out more and buy tickets here.

Here is a tempting teaser from our performance at the Harrison to persuade you along.  May we suggest that this is definitely not a night to miss?